“That’s it! I won’t be sending any Christmas cards this year!”

When I first heard these words, I couldn’t help but think how mean, scrooge-like and downright unChristmassy they sounded – all the harder to swallow because they were emanating from my own mouth.

In the fourteen years since, however, I haven’t sent a single Christmas card, and at last count I haven’t lost a single friend as a result.

It seems there are two extremes when it comes to sending Christmas cards. At one end of the scale are those who genuinely want to send a heartfelt message of goodwill to their friends and family, and take time, joy and pride in doing do. At the other end are those who feel a sense of seasonal anxious obligation. A sense of not wanting the potential embarrassment of bumping into someone over the festive season who has sent them a Christmas card, but they themselves have committed the cardinal sin of not reciprocating.

With the torrential river of mail that flows through our letterboxes every December, I finally reasoned that I’d never even have a clue as to who hadn’t sent me a Christmas card – and I’m sure I’m not the only one. What’s more, if anyone I knew was to monitor their incoming festive mail with a checklist, chances are that I wouldn’t want to be on their Christmas card list anyway. For me, that’s not what friendship or Christmas are about – again, I’m sure I’m not the only one.

This Christmas will be my third since I finally rid myself of the black dogs of anxiety and depression. Previously, I’d endured many years and many festive seasons living a secret life of needless irrational worry which, amongst other things, resulted in me burning through a box of biros every December.

When I stopped sending Christmas cards, apart from saving me a fortune on ink, the added benefit was that it also removed a massive anxiety-inducing task from my to-do list at what is already an anxiety-inducing and busy enough time of year.

With so much focus on perfect presents and a plethora of parties, Christmas can be an especially challenging time for anyone doing battle with the black dog. There seems to be such an expectation for everyone to be sporting smiles the size of Santa sacks and proclaiming endless joy to the world.

Speaking from experience, those who don’t feel so joyful within their own inner world do feel added pressure to not put a dampener on the festivities for those around them. Christmas also shines a spotlight on the fact that they think something is “wrong” with them if they can’t find it within themselves to be cheery for Christmas. Which is why even those surrounded by friends and family at Christmas often use a single word to describe how they feel – lonely.

I’m pleased to say, however, that my Christmas from fourteen years ago also has a positive, dare I say unscroogelike spin. Every day that December, I walked past a small charity Christmas tree in the foyer at work. It was decorated with brightly-coloured labels, and written on each label was the name of a child, their age, and their wish list of presents.

All these children came from poorer families in town, unlikely to receive what they wanted for Christmas. Unless, that is, someone picked their label off the tree, bought the presents on their list, and left them under the tree for the charity to deliver.

I picked off one of the labels as I headed out for lunch one day. On it was written the name David. He was twelve years old, and his wish list included a football, a cricket bat and some t-shirts. By the time I was watered, fed and back at my desk, I had also bought and wrapped David’s presents, and left them under the tree. It was only a few days later that someone at work happened to mention that we were only expected to buy one of the presents on the list. Fortunately, not even a former tight-fisted Scot like me could bring himself to chance a refund.

And I’m glad he didn’t. A few days later on Christmas morning, once the ceremonious opening of the presents was over, I sat in a sea of discarded wrapping paper. My thoughts then turned to David, and I smiled as I imagined the look of delight on his face as he opened his own presents.

And so, my best present that Christmas was realising the full extent of the saying that the greatest and most rewarding gifts are always the ones you give. All the more so if they are given anonymously, without even the possibility of a thank-you in return.

I’m not suggesting that random acts of anonymous kindness are a one-stop cure for mental illness. But they are a start; their healing power should never be underestimated.

On that note, I have a dream this Christmas. My dream is that one day in the near future, the stigma of mental illness will be completely eradicated. That way, nobody need ever feel alone again on Christmas Day; everyone’s Christmases may indeed one day be white.

I have one other dream this Christmas. My other dream is that sometime in the not too distant future, we will all be able to live every day like it’s Christmas.

Similar to my “All I Want For Christmas Is A Million-Plus Tweet” campaign last year, I’ve been on a campaign this December to have this post published in as many other media as possible around the world.

So far I’ve been very fortunate to have it published in:

If you know of anyone who might need a little encouragement to seek help this Christmas, why not share this story with them too? Think of it as a Christmas card…

Thank you for all your support for “Dancing With The Black Dog” over the past eighteen months, the story will continue to unfold into 2013 and beyond.

In the meantime, I wish you a fun-filled festive season, and may all your Christmas Dogs be white. 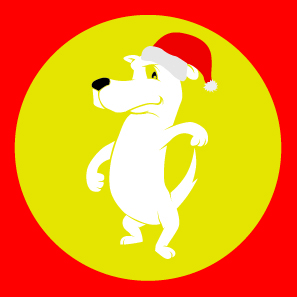 Previous Story17 – The Meaning Of Life
Next Story19 – The Phone Call