I used to believe that some of life’s greatest lessons can reveal themselves in the strangest of places, the most fleeting or unexpected of moments. In more recent times, however, I started to consider that perhaps each moment, every circumstance, any event in life, no matter how big or small, represents a learning opportunity. If that were indeed the case, all we would need to do is look for the lesson wherever or whenever we choose, perhaps even decide what it is that we want to learn.

Just a few days ago, I finally became convinced this is the case when I learned another great lesson in life – from nothing more than a bag. A small white paper bag, to be more precise.

Although I am still on antidepressants, I’ve not really felt the need to take them for over two years now, apart from a couple of minor manageable bumps along the road.

However, I’ve also learned from the stories of others who have likewise resorted to taking medication to vanquish their black dogs. Many, however, didn’t want to be a slave to the stigma of medication; as soon as they felt better, they considered themselves cured, so they stopped. And yet within a matter of daze, they found themselves pinned down once again by their old nemesis, the growling black dog.

I for one struggled too hard and for too long with my own black dogs in the past. After years of silent suffering, I literally dragged myself out of a very dark cave, one which I do not intend on ever returning to. With the normal pressures of parenthood and profession, I also have enough going on in life to even consider coming off my medication yet.

And so, with my current supply of paroxetine running low last week, I found myself heading back to the local pharmacy to fill the last of my current repeat prescriptions.

On my way, I stopped in at the newsagent next door to buy a lottery ticket. The lady in front of me was buying a birthday card, which came in a nice protective clear plastic wrapper. Nevertheless, the shop assistant asked if she would like a bag to put it in – the aforementioned small white paper bag, to be more precise.

I take a certain degree of pride nowadays in only asking for a receipt or a carrier bag if I really need one. So I have to admit to a few silent tuts crossing my lips as well as my eyebrows heading north a couple of times when the lady in front of me accepted – only to then place her now double-wrapped  purchase in her near-empty handbag.

I’m well aware that I’m not going to single-handedly save the rainforests of the Amazon just by keeping a few small pieces of paper out of circulation. But I’m also a man of principle. Not five minutes later, I found myself in the pharmacy being made more the same offer of a bag, this time to place my monthly medication supply into.

As a matter of that principle, and admittedly further encouraged by my recent Bag-gate experience in the newsagency, I politely declined. I then headed out of the pharmacy and walked back to my car, with lottery ticket and paroxetine in hand.

It then dawned on me just how things had changed for me. Barely two and a half short years ago, when I first started taking paroxetine, I’d have been waiting outside the pharmacy in a state of near hysteria, until there were no other customers inside, before daring to venture in. Even then I’d probably have had an emergency Plan B larger paper bag in my pocket, to place over my head just in case anyone else did come in after me.

After my recent visit to the pharmacy, I wasn’t exactly walking down the street shoving my naked box of paroxetine in the faces of passers-by, and saying “check out these little beauties!” Nor am I feeling deserving of or expecting a hero’s medal for bravery.

I was, however, pleased to observe that it hadn’t even occurred to me to accept a paper bag for my paroxetine. It was a stark reminder that my own stigma around medication had long since left the neighbourhood, hiding itself in the book of my personal history. 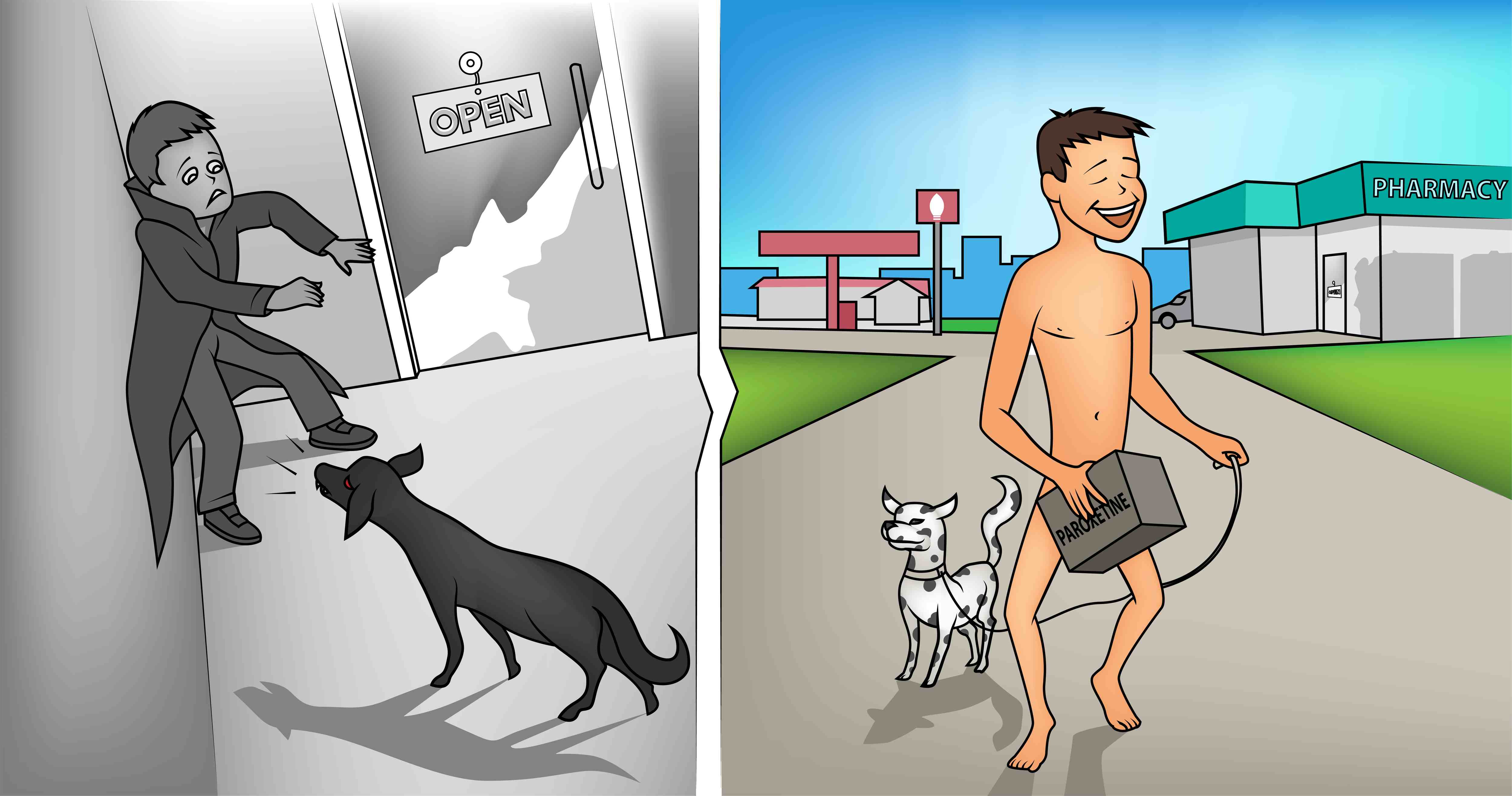 Talking of history and putting a paper bag over one’s head, by sheer coincidence and for the first time in a few years, I had also been watching one of my all-time favourite episodes of Blackadder II just the week before.

This particular episode was called “Head” – the one where Lord Blackadder found himself reluctantly landed with the role of Chief Executioner, by appointment of the Queen. Blackadder had just had Lord Farrow executed two days earlier than planned, to give himself and his team, Baldrick along with Mr and Mrs Ploppy, the middle of the week off.

To cut a long story short, this all happened without the knowledge of Lady Farrow, who had since gained the approval of the Queen to visit her husband in jail so that she could see him just one more time.

Lord Blackadder’s plan to cover up his mistake was to have Lady Farrow meet with Baldrick instead, who would disguise himself as Lord Farrow by covering his own head with a bag.

In the end, they managed to pull the whole stunt off by the skin of their teeth, but not after a few tweaks to the plan, a litany of hilarious errors, and a barrage of belly-ache laughs.

I’m sure I’ve mentioned before that I’ve always enjoyed a good laugh – whether it be watching Blackadder, Billy Connolly or Friends. Or even just hanging out with my own friends and having a laugh, cracking a few jokes together.

I’d like to think people have always seen me as a cheery, fun-loving guy. But if the truth be told, many of those who really knew me also knew how moody I could get at times. Times, that is, when the growling of my black dogs would get the better of, and louder than, all the laughter.

Even still, many people, some of my good friends, are to this day genuinely surprised when they find out that I used to dance with the black dog. They tell me that I’m the last person they would have suspected – because I always seemed so cheery on the outside.

Of course, I now realise in hindsight that cheeriness and laughter also used to act as a defence mechanisms for me; Blackadder, Baldrick and Billy Connolly were some of my own forms of self-medication. So I also had a good laugh to myself as I walked from the pharmacy back to the car, paroxetine in hand for all to see, as I realised just how much the way I now laugh has also changed – in no small part thanks to the bagless contents of my hands.

I do realise that certain medications work for some but not for others, and even then they are no cure-all; my paroxetine is no panacea. Nowadays, however, I choose to be the master of my own medication rather than a slave to it. Nowadays I love to laugh because I love to laugh; I laugh with a sense of sincerity, a sense of freedom that my black dogs deprived me of for so many years.

I also remember that for so many years, if ever I was told that such and such a person was on medication for anxiety or depression, I used to look at such and such a person and think there was something wrong with them. But having seen and experienced the way medication has turned my life around for the better, I now realise there is usually something so very right with them.

And that, at least, is no laughing matter.

If you would like to wear a dancing black dog with pride, help eradicate the stigma of mental illness, and support a worthy charity all at the same time, you can do so by visiting the Dancing With The Black Dog Store

Many thanks for your support, Part 21 will follow soon!

Previous Story19 – The Phone Call
Next Story21 – The Seventh Sense